The City of Venezia | Venice Province

Guide to Town of Venice

THE CITY OF VENICE

Venice is located in the Province of Venice, in the northeastern region of the Veneto Italy. It is located in the marshy Venetian Lagoon which stretches along the shoreline, between the mouths of the Po and the Piave Rivers and flanked by the Adriatic Sea. Venice is renowned for the beauty of its setting, its architecture, and its artworks. The city in its entirety is listed as a World Heritage Site, along with its lagoon.

The historical city is divided into six areas or "sestiere" (while the whole comune (municipality) is divided into 6 boroughs of which one is composed of all 6 sestiere). These are Cannaregio, San Polo, Dorsoduro (including the Giudecca and Isola Sacca Fisola), Santa Croce, San Marco (including San Giorgio Maggiore) and Castello (including San Pietro di Castello and Sant'Elena).  Each sestiere was administered by a and his staff. Nowadays each sestiere is a statistic and historical area without any degree of autonomy. These districts consist of parishes. initially seventy in 1033, but reduced under Napoleon and now numbering just thirty-eight. These parishes predate the sestieri, which were created in about 1170. Other islands of the Venetian Lagoon do not form part of any of the sestieri, having historically enjoyed a considerable degree of autonomy. Each sestiere has its own house numbering system. Each house has a unique number in the district, from one to several thousand, generally numbered from one corner of the area to another, but not usually in a readily understandable manner.

The name Venice is derived from the ancient Veneti people who inhabited the region by the 10th century BC. The city historically was the capital of the Republic of Venice. Venice has been known as the "La Dominante", "Serenissima", "Queen of the Adriatic", "City of Water", "City of Masks", "City of Bridges", "The Floating City", and "City of Canals".  Venice has also been described as being one of Europe's most romantic cities.

The Republic of Venice was a major maritime power during the Middle Ages and Renaissance, and a staging area for the Crusades and the Battle of Lepanto, as well as a very important center of commerce (especially silk, grain, and spice) and art in the 13th century up to the end of the 17th century. This made Venice a wealthy city throughout most of its history. It is also known for its several important artistic movements, especially the Renaissance period. Venice has played an important role in the history of music, and it is the birthplace of Antonio Vivaldi.

Venice is built on an archipelago of 117 islands formed by 177 canals in a shallow lagoon, connected by 409 bridges. In the old centre, the canals serve the function of roads, and almost every form of transport is on water or on foot. In the 19th century, a causeway to the mainland brought the Venezia Santa Lucia railway station to Venice, and the Ponte della Libertà road causeway and parking facilities (in Tronchetto island and in Piazzale Roma) were built during the 20th century.

Beyond the road and rail land entrances at the northern edge of the city, transportation within the city remains (as it was in centuries past) entirely on water or on foot. Venice is Europe's largest urban car-free area. Venice is unique in Europe, in having remained a sizable functioning city in the 21st century entirely without motorcars or trucks. The classical Venetian boat is the gondola, although it is now mostly used for tourists, or for weddings, funerals, or other ceremonies, or as 'traghetti' to cross the Canale Grande in the absence of a nearby bridge. Many gondolas are elegant  with crushed velvet seats and Persian rugs to make the ride more royal. At the front of each gondola that works in the city, there is a large piece of metal called the 'ferro,' or iron. Its shape has evolved through the centuries, as documented in many well-known paintings. Its form, topped by a likeness of the Doge's hat, became gradually standardized, and was then fixed by local law. It consists of six bars pointing forward representing the Sestieri of the city, and one that points backward representing the Giudecca 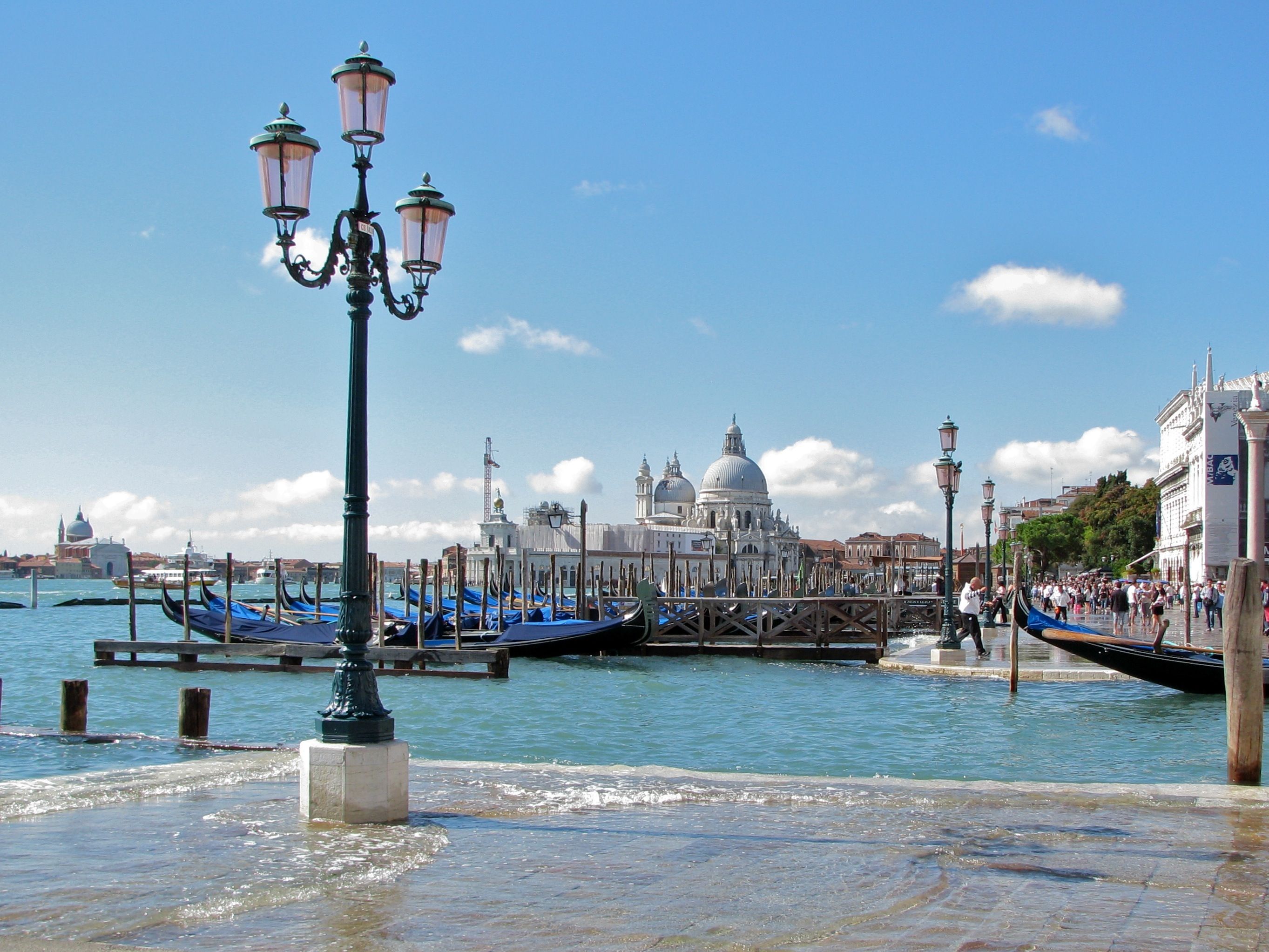 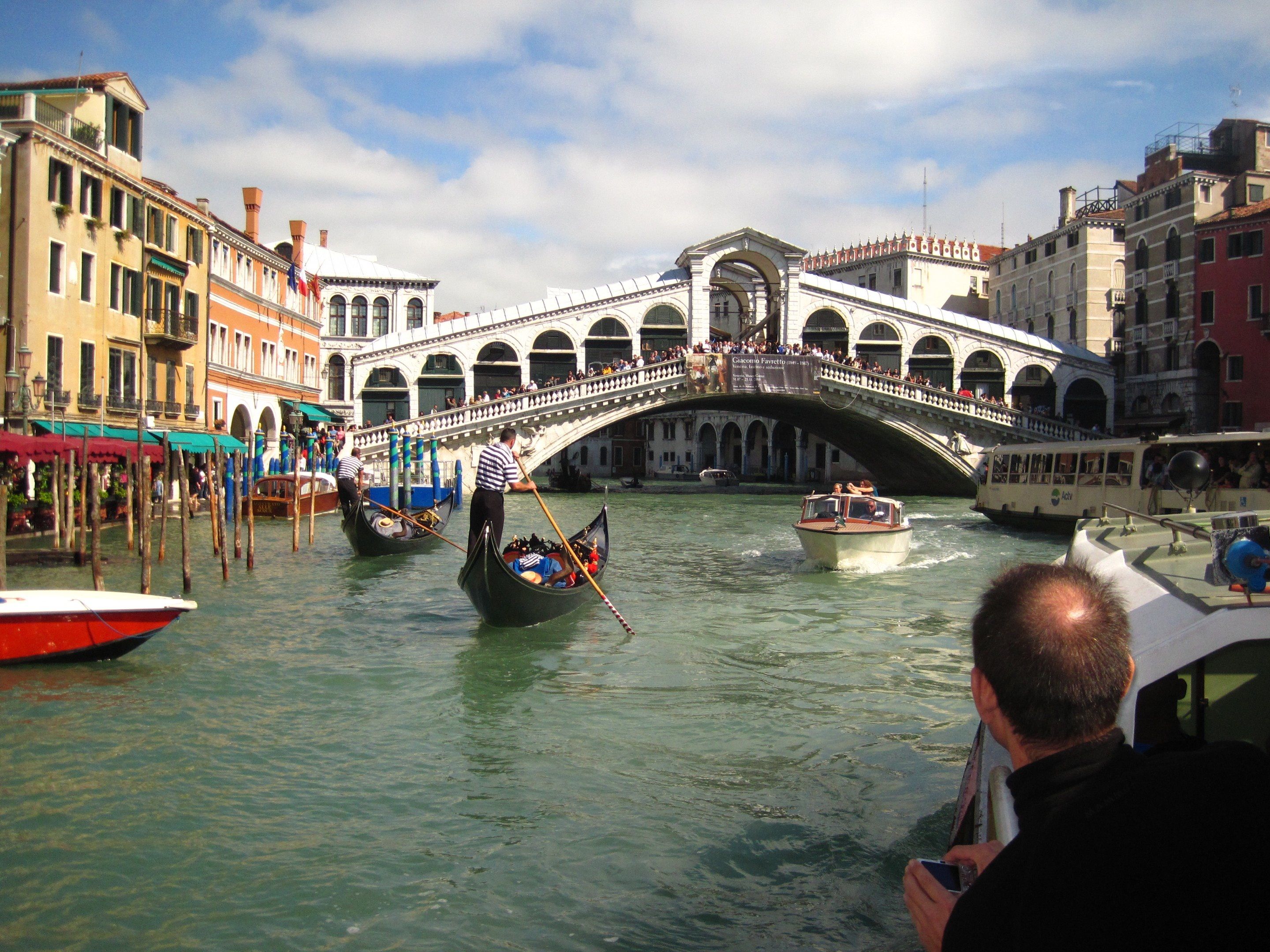 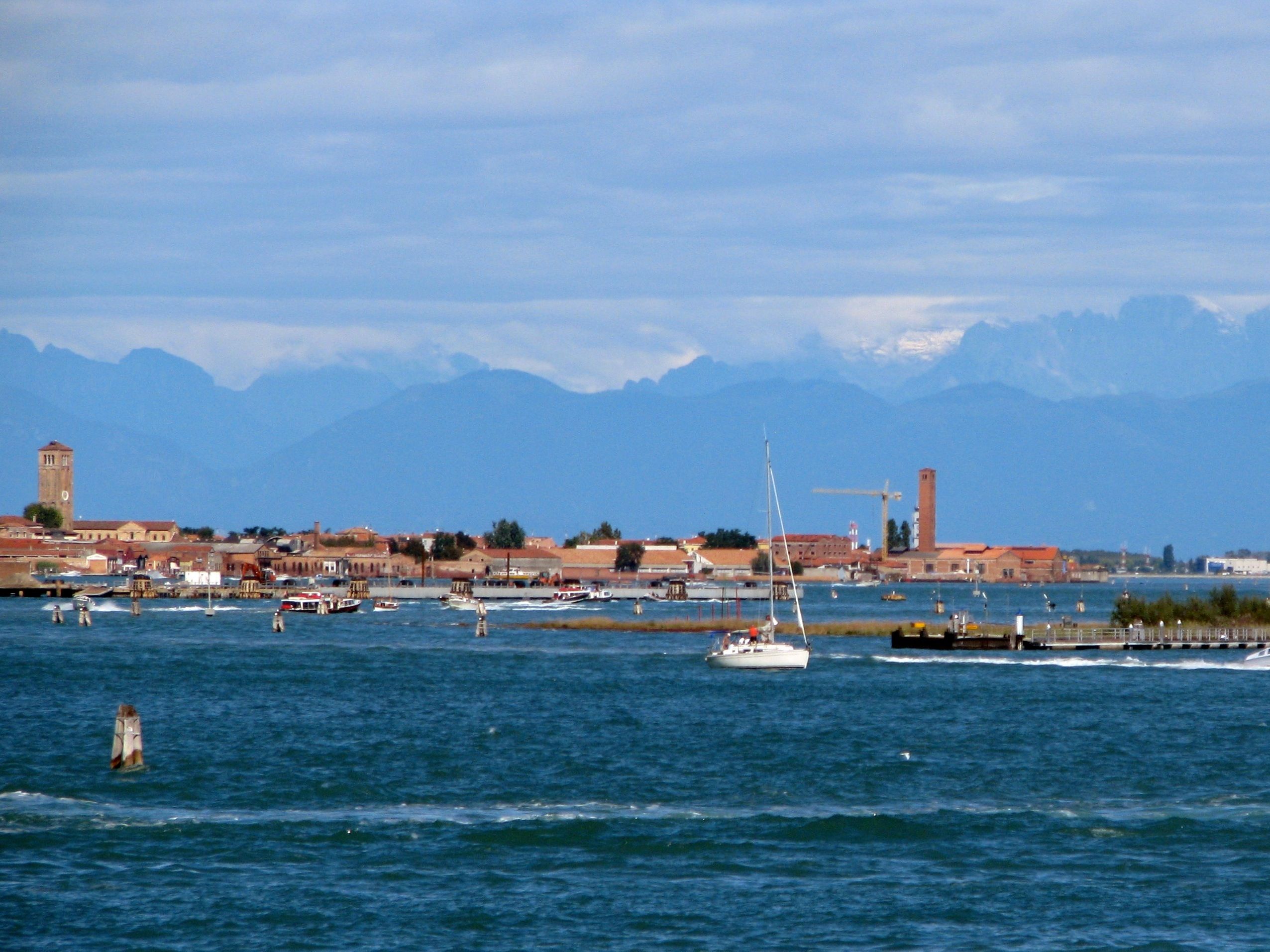 The Doges Palace (or Palazzo Ducale) was the residence and political headquarters of the Dukes of Venice for 900 years, and was finely decorated by famous Venetian artists such as Tintoretto, Titian and Bellini. It is open every day from 8.30 am to 7 pm and tickets cost €16. The Basilica San Marco is an extraordinary marvel reflecting influences from East and West. Domes and columns, gold and marble, statues and dazzling mosaics - the city cathedral is truly breathtaking. It is open from 9.45 am to 5 pm and entry is free.

The Grand Canal and Rialto Bridge
One of the best ways to see the city is from the Vaporetto No 1 which follows the Grand Canal all the way through the centre, passing beautiful churches and palazzos, the lively Rialto fruit and vegetable market, crossing under the famous Rialto Bridge and delivering you to Piazza San Marco at the end.
Accademia Galleries and Peggy Guggenheim Collection
The first is a truly stunning collection of 14th - 18th century masterpieces to rival the Uffizi in Florence. Campo della Carita - open 8.15 am to 7.15 pm except Mondays when it closes at 2 pm. Entrance fee €9.00. The second is the private modern collection of Peggy Guggenheim housed in her former home at Palazzo Venier dei Leoni on the Grand Canal. Open 10 am - 6 pm Wednesday to Monday. Entrance fee €14.
The Islands of the Lagoon
If you have a longer stay in Venice don't overlook a ferry ride to the Islands. Murano has been famous for its crystal and glass industries since the 10th century and has a museum and several shops selling authentic pieces. Burano is a colourful fishing community famous for its lace-making and Torcello is a quiet haven, with some of the most famous mosaics in Italy. The Lido is Venice's glamorous beach resort and home to the annual Venice International Film Festival.
If you have a few days in Venice it may be worth investing in the VeniceCard which gives you unlimited use of the vaporetti boats, free entry to the 11 civic museums and 16 churches. See details at www.hellovenezia.com
Attractions of Venice .....

Where to Stay in Venice

Venice has a huge number of hotels, many with exgurated room rates, and your budget will make a big difference to where you might stay. A useful website is http://en.venezia.net/venice-hotels/ which you can search in English and search by the areas of Venice and/or by budget. Some of the hotels listed below are one's we have recommened to our guest in the past and well recieved.

As a general rule we recommend staying outside the city if you are only viisiting for one day or have a early flight the next morning.  Contact us at This email address is being protected from spambots. You need JavaScript enabled to view it. for any travel quetions.

Situated in a converted 16th century Palazzo with its own courtyard, the rooms have been elegantly renovated. Situated close to Piazzale Roma, towards the northern end of the Grand Canal.

Right on the Giudecca Canal, this charming pensione retains its antiques and polished floors but also offers mod cons such as wifi. It has a lovely roof terrace where you can enjoy breakfast.

Situated just a few steps from the Ponte Rialto and the Grand Canal this 15th century palace offers an excellent location and some genuine old world charm.

A small hotel with 17 pretty rooms located close to the Campo San Zaccaria in the Castello district.

2011 Award Winner as Most Romantic Hotel in Europe by Condé Nast Johansens.

Where to Eat in Venice

Sophisticated and renowned restaurant where the menu changes depending on what is fresh at the market. Reservations are definitely recommended. Calle del Scaleter, San Polo district. Tel +39 041 721 308

Tiny restaurant but a big reputation - and an interesting wine list. Fondamenta San Felice, in the Cannaregio district. Tel +39 041 528 5140

How to Get To Venice

Venice has the international Marco Polo airport on the mainland, from where you can take the Orange Line ferry to Venice centre, or a water taxi, although this is cheaper if you can double up with other passengers. Trains into Santa Lucia station are often the easiest way to travel into Venice and there are good connections with Padova and Verona, but also Milan, Bologna and Florence. Once in Venice, the vaporetto boats are the best way to get about.

For all train information visit www.trenitalia.com which has an English version.
Train travel in Italy is inexpensive and comfortable. Major cities are served by non-stop fast trains known as the Eurostar.

Italo
NTV (Nuovo Trasporto Viaggiatori) is a new private company which started operating it's Italo high-speed trains on the Milan-Florence-Rome-Naples route in April 2012, in competition with State-owned operator Trenitalia. NTV have added new routes subsequently and are Europe's first private high-speed train operator, with a real emphasis on customer service. Travellers should be aware that the city stations used are not always the same as those used by Trenitalia.

Places Around The City of Venice