Excellent signposted route that takes you from Vicenza to the walled city of Marostica and onto Bassano del Grappa.  The route is on secondary roads and well marked with directional signs. 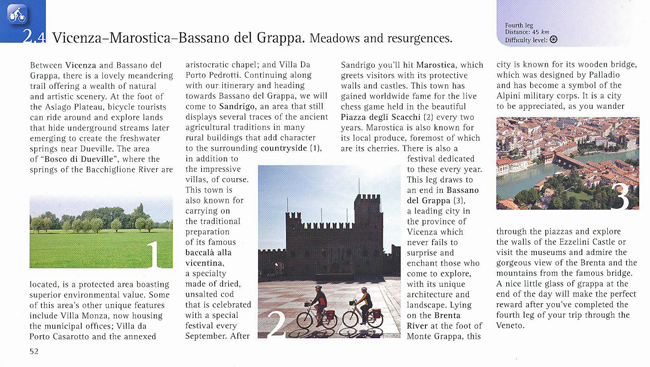 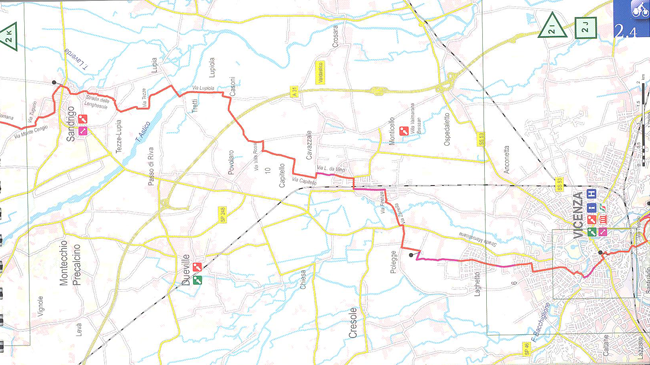 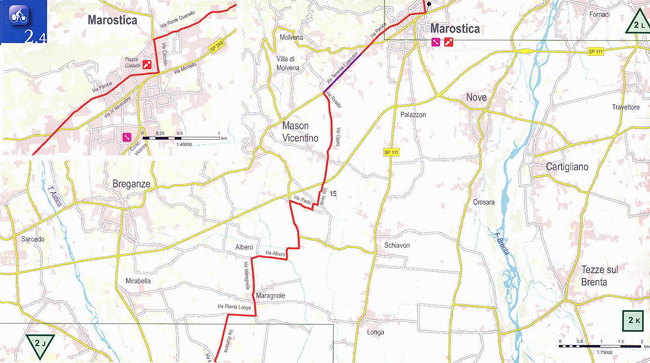 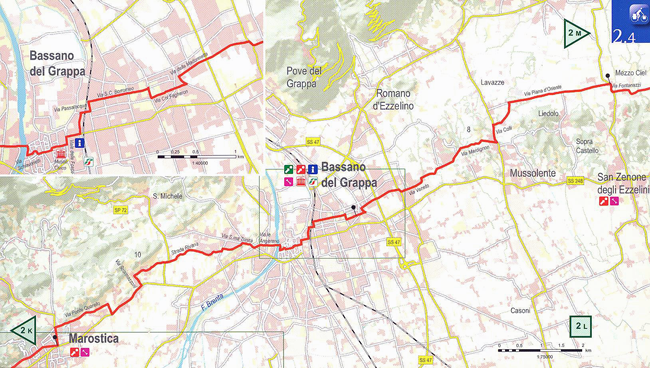 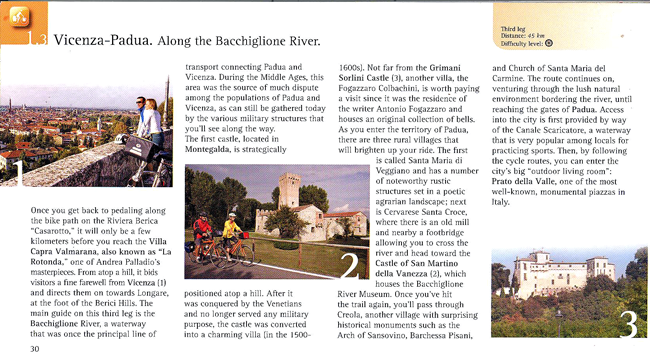 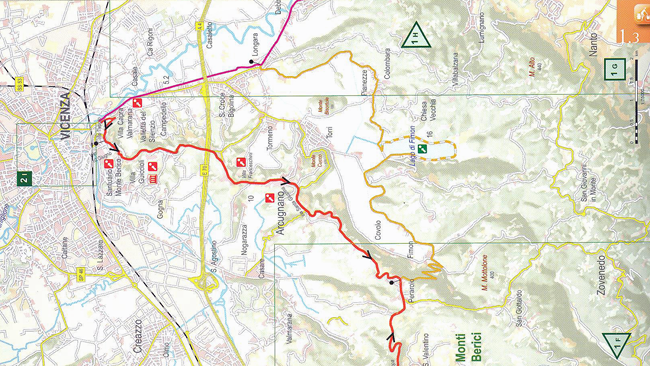 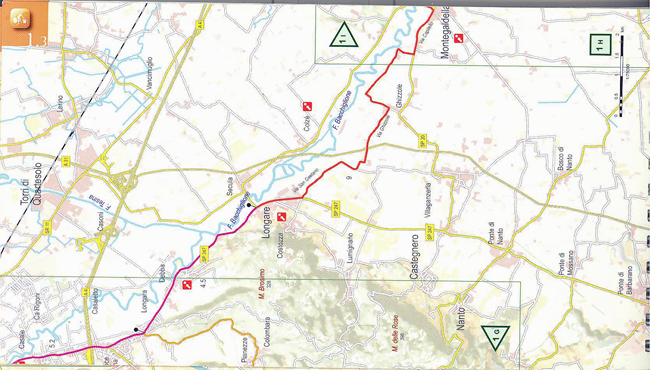 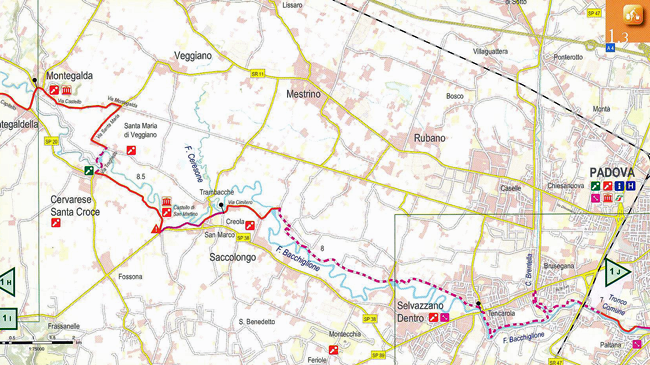 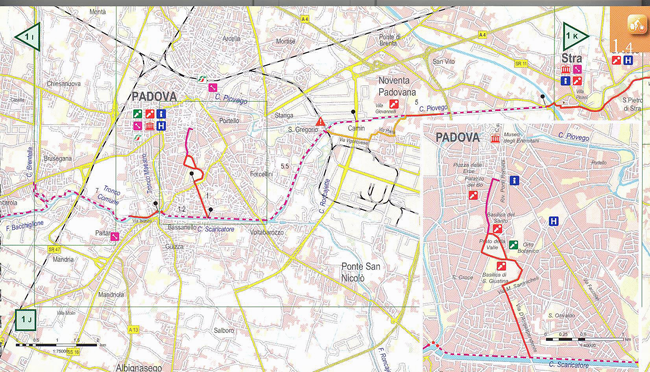 Vicenza is the land of Palladio: it is here where Andrea Palladio lived and left behind the majority of his masterpieces. This is why UNESCO has awarded the historical city of Vicenza and the Palladian villas throughout the province with the honorable title of World Heritage Site.  on this trip you will be able to pass through Vicenza's provincial countryside until you reach Lago di Fimon laying at the foot of the Berici Hills. 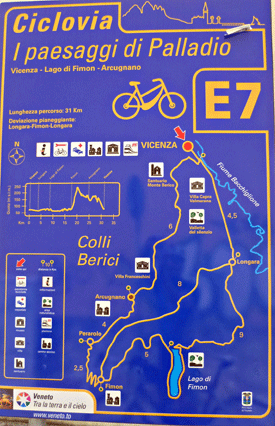 Distance: 30 km
Route: Paved bike paths and secondary roads paved in most sections.  One uphill section that can be detoured by taking the alternate roue on level ground.
Start/Finish: Vicenza 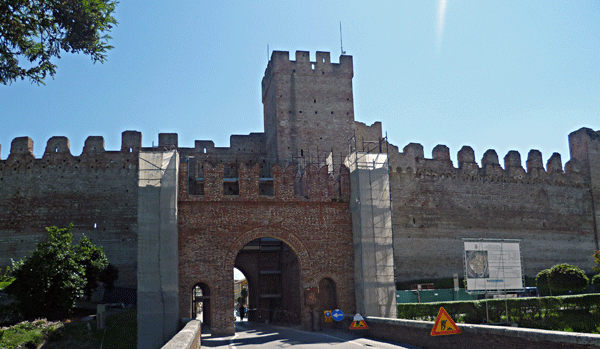 There were many Roman settlements in the Veneto Region, and there are still signs of the old roads, even if the environment has been altered, parts of the old road foundations can still be found. The Postumia can be traced from Vicenza to the northwest and followed to Cittadella, Castelfrano Veneto and then south to Noale. Since the road sits·north of the main autostrada "A-4", and the train line along the route is a secondary line there are not a lot of people travel this street during their vacation. This is a great off the beaten path trek to take as part of a day loop or as your transfer from the Vicenza province over into the Treviso province. Driving along the state road will not leave you impressed, the best way to discover this area is by bicycle or use the train to get to various walking points. 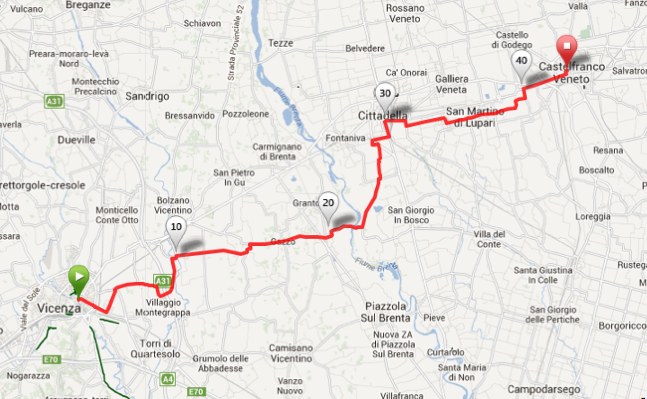 The area you will pass through is well known for its textile, gold, and tile producers, for a cyclist and those enjoying the outdoors there are also multipule bike factories and·mountain equipment manufactures.

THIS IS A GREAT BIKE AND TRAIN ROUTE 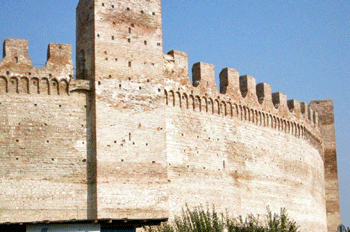 Bike from Vicenza to Cittadella is only 22 km along the main road, however if you work your way to Cittadella by bicycle you can make a 30 to 40 route quite easily. The main Vicenza provincial towns along the main road are Monticello Conte Otto, Quinto Vicentino, and Bolzano Vicentino; once you are in the Padova province there are the towns of San Pietro di Giu, Gazzo, Grantorto, and after crossing the Brenta River you have Fontaniva, and Cittadella.

VICENZA - The north eastern of the Vicenza city limits has many hidden monuments and historical villas. The township of Bertesina, has the villa Marcello, a Palladio masterpiece. In the township of Anconetta is the villa Lampertico.

MONTICELLOCONTE OTTO - The town crest shows a castle on the hill that is said to have belonged to Otto Bonamici, who controlled the area in the 13th century. The actual castle no longer remains but it is also believed that the villa Valmarana Bressan was built on the ruins, the villa was one of Palladio's earlier works.

BOLZANOVICENTINO - The area has been a crossroads along the travel routes between Lisiera (a nearby township where, today the Pastunia road and  the railway intersect with the main road to the Valdastico valley. Within the township is the Pallido villa Valmarana Zen, one of the main works in the Palladio's "Four Books of Architecture".

QUINTOVICENTINO - The name comes from the Latin Quinto, which means fifth, and is a reference to the towns position from Vicenza, measured in Roman miles along the old via Postumia. The townships main buildings, villa Thiene is now the town hall and holds a collection that shows the legacy of the Vicentine family that once owned the area.

The ancient Via Postumia

The Via Postumia is an ancient Roman road constructed in 148 BC by the consul Spurius Postumius Albinus Magnus. The road was built for military purposes, it joint the Latin colonies of the Cisalpina area (Piacenza, Mantova, Creomona) to Aquileia and eastern territories. The Via Postumia was a defense line that crossed the Veneto, a region rich in culture whose history has been influenced by the numerous peoples that settled in its territories over the centuries. Veneto peoples were called Paleo Veneti: they were simple and friendly people, most of them practiced subsistence farming. After Romans’ invasion, they built many infrastructures such as the Via Postumia. A peculiarity of this geographical area is the underground springs. Rivers deposited strata of differentially permeable soils that formed several underground springs. This property of the soil influenced the construction and the course of the road. Despite the economic boom experienced by the Veneto region after WWII, which drastically changed the territories crossed by the Via Postumia, the production of traditional products such as wine did not halt and still today the region is well known for its fine wines. The ancient Roman road crossed the very same hilly region where today DOC wines are produced. Driving eastwards along the Via Postumia, explorers arrive in Valeggio sul Mincio, at the doors of Veneto region, and they can enjoy the mills, the traditional houses, the ancient and mysterious Visconteo Bridge over the Mincio river and the view of the Scaligero Castle. Also, the city of Verona, well known for its cultural heritage and for hosting two Shakespearean plays has developed along the Via Postumia. Past Verona the traces of the ancient Roman road get lost while beyond national borders its course is still well defined. In Slovenia the Via Postumia ends in the thousand-year-old city of Postumia, today widely known for its spa and caves. 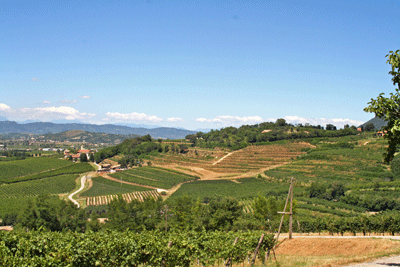 This is one of the best bike rides in the Veneto is just south of the city of Vicenza, in the Colli Berici.  The Tocai Rosso Wine Road is a marked route through the hills that takes you near many of the local producers.    As well, you will find the route full of  Palladio and Venetian villas, vinyards, caves, small villages, and hidden history.  This bike ride is well off the typical tourist path and givers you a true look at Italy.

This is a great one-day trip even if you are staying in Venice, Padova, or Verona since it offers you a chance to visit Vicenza and see the country side.  If you are cycling through on the classic velo 7 bike route I would make a route change and include the back portion of this route.   The tourist office has a couple of route suggestions for day rides but this is a much better route.  I you are not a strong rider there is now an option to ride along a bike path that has been extended past Barbarano.

Vicenza is on the main train line between Venice and Milano.  You can catch a train with a bike car and once you get off at Vicenza train station you are at the start of the route.  There are also plenty of options for basing yourself in Vicenza.

Bike Rental: You can organize a bike rental from Italiaoutdoors.