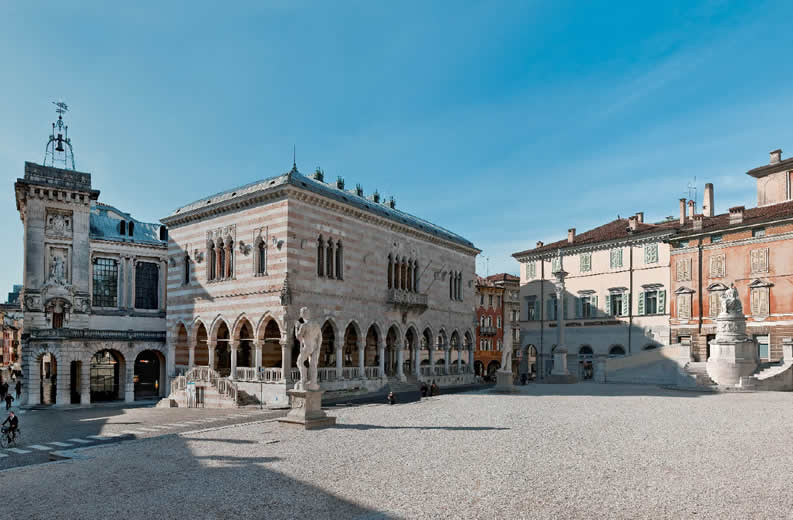 The city of Udine is the capital of the Udine Province in the Friuli Venezia Region and is an charming city  with friendly squares, Tiepolo masterpieces and traditional osterias Looking at Udine from the hills where the historic castle stands, to the north you see the red roofs of the city and beyond to the crests of the hills and mountains that protect it, whereas to the south, less than an hour's drive away, there is the Adriatic Sea.

What to see in the City of Udine

You can almost imagine how it was in the 17th century, when Giambattista Tiepolo at the height of his artistic maturity created his works, that are now housed in the Tiepolo Galleries (Palazzo Patriarcale), the cathedral and the church of the Purità. Udine is a pleasant, friendly place to enoy the late afternoon and you find the locals after work making a stop in one of the traditional osterias for: 'un taj di chel bon', a good glass of wine in company.

A mixture of fascinating Venetian piazzas and fine old palaces, a series of old, brightly coloured, portico-lined piazzas between Piazza Libertà, “the most beautiful Venetian piazza on the mainland” and Piazza Matteotti (or Piazza delle Erbe) have all the atmosphere of an open-air sitting room, and are the very essence of the city. The city centre streets are full of brand name shops and craft workshops (many of them specialising in Lombard-style gold items), historic cafes and osterias, all in a very human, cordial and hardworking atmosphere.

History of the city of Udine

Much of the history of Udine is unclear and it is believed the orgin of the city was around the 5 th century, when the castle was built to defend the area against the Hungarian invasions. Records show that in 983, Emperor Otto II ceded the castle of Udene to the Rodoaldo the Patriarch of Aquileia and the area remained under church rule for a period of time but played no major role. Then in the 13 th century the Patriarch Bertoldo of Andechs abandoned Cividale and moved the seat of the church back to Udiine. At this point the city became a focal point in the region started to prosper and grew to be Capital of Friuli. Several sets of defensive walls were built and modified during the next few hundred years and in the 14 th century the city and surrounding area became part of the Venezian Republic.

Venezian rule was relaxed and the city enjoyed considerable autonomy. The period brought a dramatic development in town-planning, art and culture. Piazza della Liberta, Palazzo del Comune and the Portico di San Giovanni all date between the 15 th and 16 th century. In the 18 th century the town was enhanced by G.B. Tiepolo, who painted several cycles in the Duomo and frescoed the Palazzo Patriarcale and the Oratorio della Purita.

After the fall of the Venetiona Republic and the short period of Napoleonic rule, Udine became part of the Austrian region of Lombardy-Venetian. In 1866 the area was became part of the Kingdom of Italy as part of the treaty in the Pussian – Austrian War. Unlucky of both parties the borders were not draw on historical lines and this lead to Italy joining the Great War against Austria.

Much of the Friuli Venezia Region was part of the Battlefields of WWI, but after the war Udine started to expand outside of the city walls. Today the city spreads itself out in the valley and has a very vibrant culture.