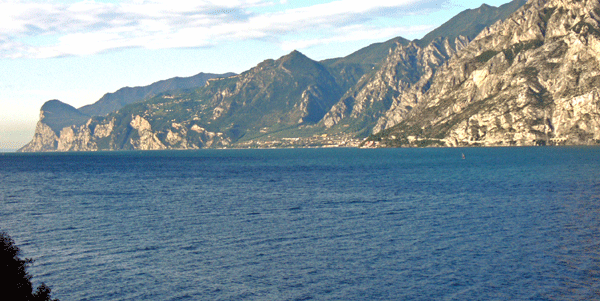 A 52 km path that starting, from the center of Peschiera arrives to the center of Malcesine, will make you discover the variety of scenery and landscapes offered by the Riviera degli Olivi on Lake Garda. It starts from a coastal environment by the waters of the lake and then switch to a hilly area rich of vineyards and olive groves, crops that have made this a popular tourist destination in the world. From here, an easy ascent leads at the top of the Rocca above Bardolino and Garda, before descending again to the lake near the beautiful Punta San Vigilio. The route then connects to the historic path of the Pellegrino and arrives to Malcesine, through woods and ancient villages alternated with stretches with beautiful panoramic views of the blue lake. This path can be done by mountain bike or on foot from any town of the Riviera with direction north or south using the various access roads. Of course, the journey can be covered in a day or in stages, using, in whole or in part, also the public transport (bus or boat).

Sign posted bike route that is the first leg of the Veneto Regions bike touring itinearies. The route takes you from Italy's largest lake, through the wine areas, and over to the city of Verona.  If you plan your vacation well you could catch an Opera at the Arena during the summer months.  This is a great ride with some small hills but there is multipule things to do and see.

Starting in the old city of Pescheria del Garda take the main road north through Lazia, Bardolino and then Garda, the town that gives the lake its name.  From Garda make you way to the Camaldolese Hermitage, it is still run by a small community of Benedictine Monks.  You are still riding through the Bardolino wine-yards and olive groves, hidden in the fields is the Church fo San Severo.  To get to the Adige Bike Path from here you can either ride past the Riviera degli Olivi or go down towards Pastrengo, passing through the village of Calmasino.  The first option you find Rivoli Veronese, an urban area on the southern slopes of Monte Baldo known as the 'morainic amphitheatre'.  The area was the part of the battle ground during Italy's 'First War of Independence' and still hosts forts built by the Austrians, to defend the Adige valley.

From Rivoli you head in the direction of Verona enjoying a nice bike path and a view of the Valpolicella wine region.  Valpolicella is well known for its Amarone and Recioto wines.  Along its route you will pass the towns of Pescantina and Bussolengo, which were once important river ports.  Verona can be accessed over the dam in Chievo, at the end of the bike path, you will come to a path running along the dam and from here you can start your ride around the city.  Verona combines a millennium of history with contemporary art. (Overnight Verona) 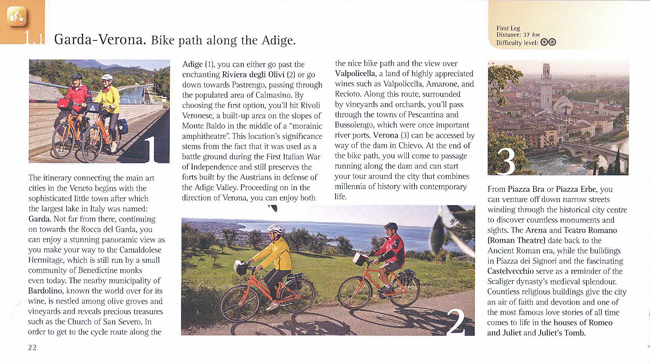 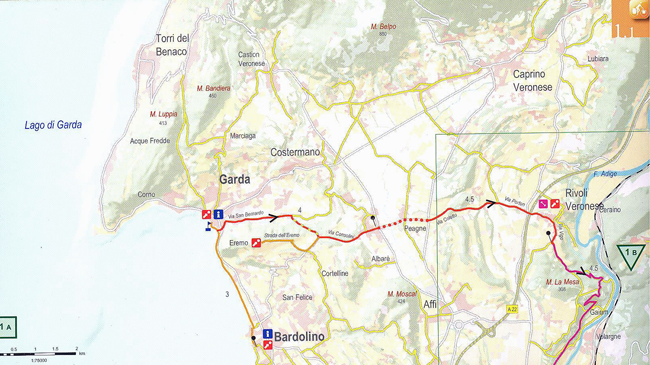 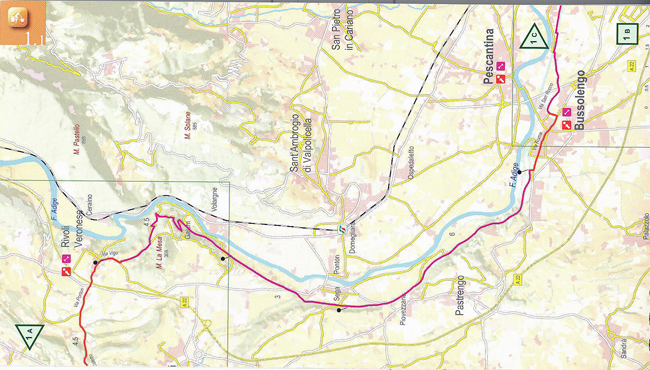 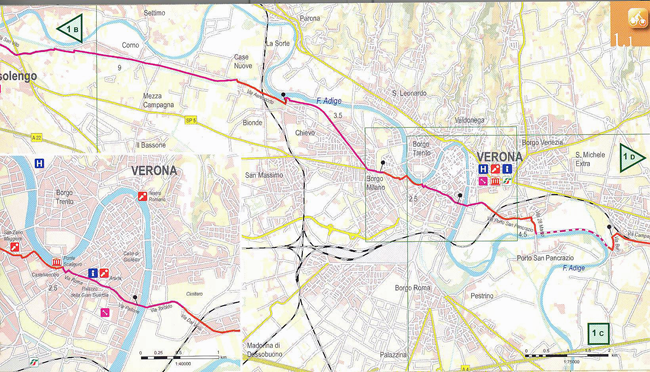 Peschiera del Garda to Mantua is one of the most popular bike trails in Northern Italy.  A busy route that is visited each year by local and traveling cyclist, the route is well marked and on level ground.  The route takes you along the parts of the Mincio River passing from the Verona province into the province of Mantua.

This signposted Regional Bike Route, that starts in Verona and takes you to Vicenza, is getting more riders each year.  There are still program bookets you can pick up at the tourism office.  The route is fairly flat with a climb up into the Berici Hills before you decend down into Vicenza.  There is a flatter route you can ride but there is more traffic and not as scenic.

The ride takes you through the countryside cultivated, with fruit orchids and vegetables.  You will pass through the towns of Zevio and Belfiore along this route and after about 30 kms you arrive to the walled city of Soave.  Soave has it origins in during the Longboard invasions and its medieval characteristics are still seen in many of its present structures.

After enjoying one of the many Soave wines and lunch you ride to Monteforte d'Alponse at the foot of the Lessina Mountains.  As you ride you will pass through Gambrella and Montebello wine zones before crossing into the Vicenza province.  Once you arrive to Brendolo you have a short climb to make to reach the upper part of the Berici Hills.  From here forward you are in the land defined by Andrea Palladio's buildings and elegant villas.  This road leads you into the 'City of Palladio' Vicenza. (Overnight Vicenza) 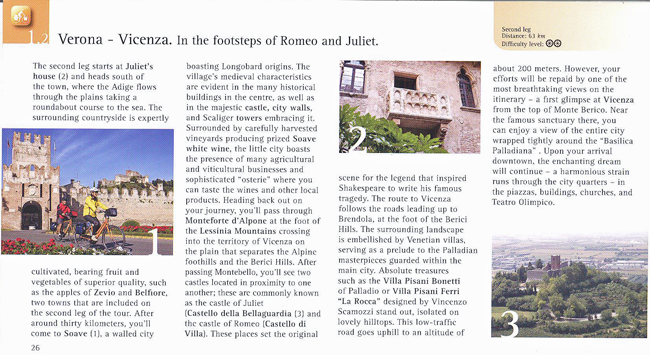 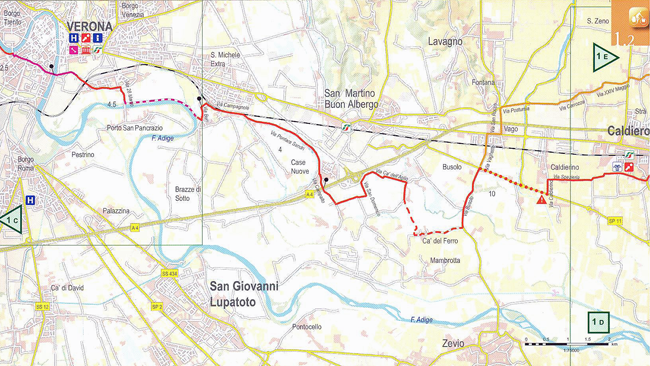 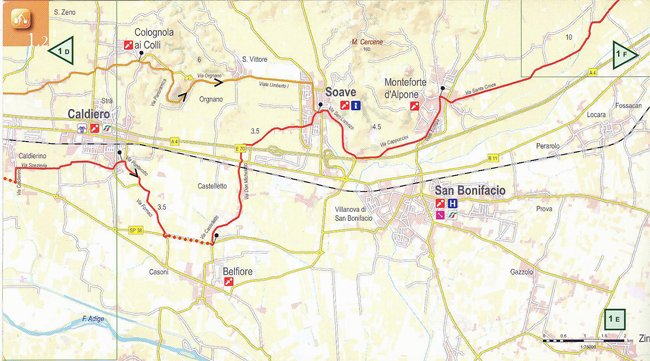 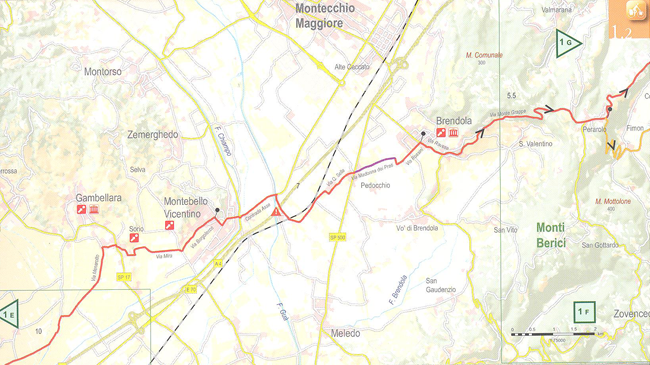 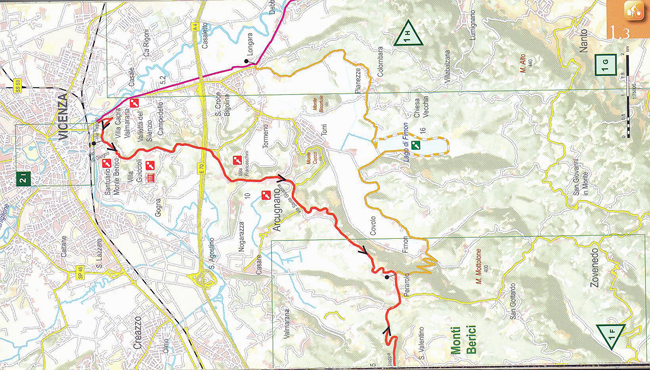