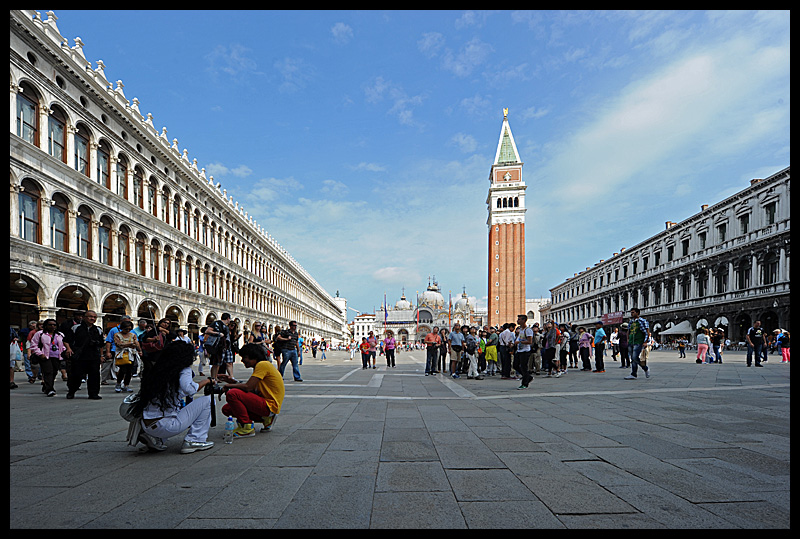 San Marco Square is the greatest people watcher place in the city of Venice and is a year-round carnival of milling tourists, a endless supply of pigeons, locals relaxing at outdoor café tables, and couples caught up in Venice's romance, and at time fulled with water as if to give you a new prospective. The square is enclosed on three sides by a unified 16th-century arcade and is crowned by St. Mark's Church, Italy's most mosaic covered cathedral. The square is a mob by midday, but late at night or at dawn it's virtually deserted, an emptiness that brings it to life with a Venetian magic all its own.

WHAT TO SEE IN SAN MARCO SQUARE

Piazza San Marco has famously been called "the drawing room of Europe," a quote that has been attributed to Napoleon. The square is named after the stunning Basilica San Marco that sits on the east end of the square. The Campanile di San Marco, the basilica's bell tower, is one of the square's most recognizable landmarks.

Adjacent to Saint Mark's Basilica is the Doges' Palace (Palazzo Ducale), the erstwhile headquarters of the Doges, the rulers of Venice. The paved area that extends from the Piazza San Marco and forms a large "L" shape around the the Doges Palace is known as the Piazzetta (little square) and the Molo (jetty). This area is characterized by the two tall columns along the waterfront which represent Venice's two patron saints. The Column of San Marco is topped with a winged lion while the Column of San Teodoro holds up a statue of Saint Theodore.

Saint Mark's Square is bordered on its other three sides by the Procuratie Vecchie and Procuratie Nuove, built, respectively, in the 12th and 16th centuries. These connected buildings once housed the apartments and offices of the procurators of Venice, government officials who oversaw the administration of the Venetian Republic. Today, the Procuratie Nuove houses the Museo Correr, while famous cafés, such as the Gran Caffè Quadri and Caffe' Lavena, spill out from the Procuraties' arcaded ground floors.