Town Of Bagnone In Tuscany 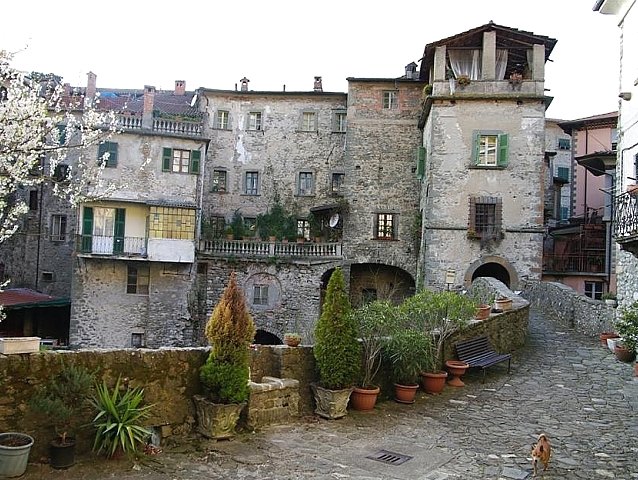 Bagnone lies in the upper portion of the mountainous Lunigiana Region that is part of the Carrara Massa Province in Tuscany. Starting as a castle and its lands, Bagnone then became a vicariate of Florence in the 15th century. The town’s economy was primarily based on chestnut and sheep farming. Bagnone is an exciting tourist destination thanks in particular to its weekly market and large seasonal fairs. Today, the area’s economy is centered around agriculture production, primarily grapes and olives.

Bagnone was founded on a bend in the Bagnone torrent, which runs under the ancient village that grew up due to presence of the Malaspina castle. In the mid-1400s, the four ancient families of the village were joined by artisans and shopkeepers from Vico, Fornoli, Taponecco, Pontremoli, Pàstina, Merizzo, and Panicale. In 1428, from Malgrate, there arrived, “nude and now dressed,” the spice-seller Giovanni Antonio da Faye, the great and disenchanted chronicler of the Lunigiana of the 15th century. At his death, he was interred in Bagnone’s military chapel.

Bagnone soon became one of the four great marketplaces in the Magra valley: under its portico, a lively melee of sellers of fresh fruit and vegetables, merchants from the Parma area, butchers, tailors, cobblers - and of course, gamblers and moneylenders.

The beautiful parochial church of San Nicolò has a precious organ and a venerated relic of the Holy Cross, and with its stately facade dominates what may be defined as a classical Italian square, faced by the hall of justice, city hall, the schools, and the Palazzo dei Cortesini. The nearby Villa Quartieri stands in a large park; the square at the entrance is adorned by a large portico/monument to the fallen in all wars. Everything, including the recently restored theater, built during the Fascist era and now returned to its original function, pays mute homage to the consummate artistic skill of the stoneworkers of Lunigiana.

In Treschietto, the tower of Giovan Gasparo Malaspina, at the edge of a ravine, evokes the sly marchese who collected excommunications and death sentences, while in Jera we breathe the rarefied air of the mountains among producing chestnut groves and streams abounding in fish.  The water-driven mills of Vico and Corlaga still grind chestnuts into flour, while archaeological exploration in the environs has turned up the only post-medieval kiln ever discovered in Lunigiana, where testelli and earthenware were produced.

But the greatest surprise in the area is Castiglione del Terziere, seat of the Florentine captaincy, with its castle/palace brought back to life by Loris Jacopo Bononi, physician, poet, and writer, who collected some of the most precious testimony about the Lunigiana region: documents, antique books, valuable first editions, and handwritten manuscripts by men of letters and poets. Here is the legacy of centuries of culture in Lunigiana, of the incredible array of poets, writers, notaries, men of letters, military leaders, able politicians, and men of the cloth who lived at the most celebrated Italian courts and who exported the genius of this border land throughout the world.

The church at the Pieve bears witness to the ancient ecclesiastical organization of the Diocese of Luni. The road from Collesino leads to the homes of Apella near Licciana, the homeland of the legendary Risorgimento hero Anacarsi Nardi, executed by firing squad with the Fratelli Bandiera.