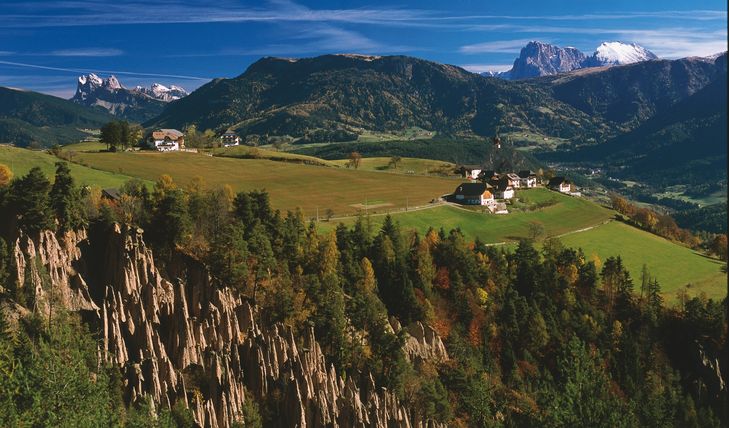 Renon - Ritten, Province of Bolzano, Trentino Alto Adige, Italy. Also known with the German name of Ritten, the town rises in the wide, picturesque plateau between the valleys, of the Talvera and Isarco rivers, and consists of three smaller centres: Ritten itself, Collalbo (or Klobenstein), Costalovara (or Wolfsgruben).

It is one of the largest communes in South Tyrol, with an altitude between 250m and 1300m. The inhabitants are mainly of native German tongue. It is a renowned sports resort, with tennis courts, swimming pools, bowling and horse riding, as well as skiing facilities and skating rings.

Renon is connected with Bolzano with a provincial road and with a cableway from Oberbozen - Soprabolzano, the longest cableway of the world in one track, about 4 km long and 12 minutes to travel. This cableway replaced in 1960 the previous rack railway, built in 1911. The railway is still in function on the mountain side between Maria Himmelfahrt/Maria Assunta and Klobenstein/Collalbo.

WHAT TO SEE IN RENON