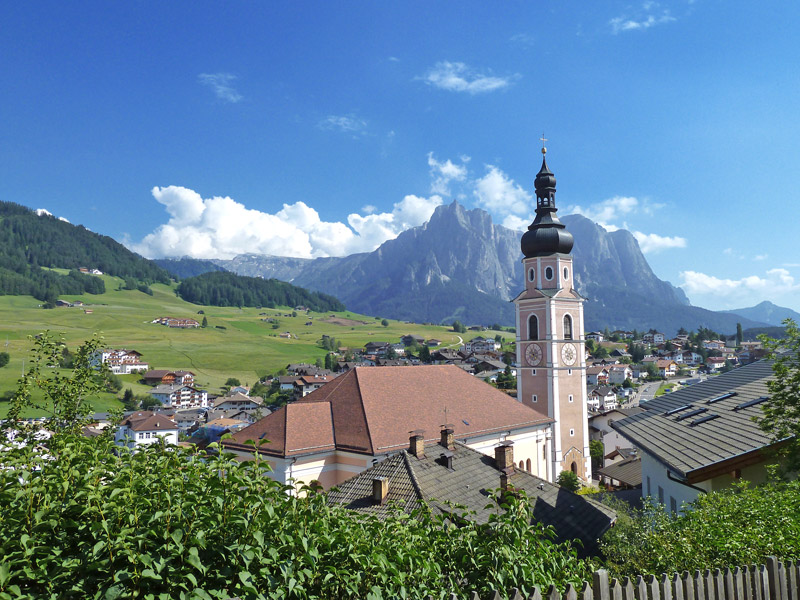 Castelrotto - Kastelruth, Province of Bolzano, Trentino Alto Adige, Italy. It is a "comune-mercato" (a town with medieval market rights) in the centre of the District of Salto -Sciliar (Salten-Schlern), with part of its territory within the Schlern park, at the foot of the Dolomites.

The municipality consists of the main town of Castelrotto and ten "frazioni", including also the extensive Seiser Alm, the plateau occupying almost half of the area. The Seiser Alm is nature reserve, a smaller part belongs to the Nature Park Sciliar-Rosengarten. The three villages Bulla, Roncadizza and Oltretorrente lie on the south-western side of Val Gardena and thus belong to the Ladin language area.

The name "Castelruptum" appears for the first time in a document of 982-987 of Albuino, the Bishop of Bressanone. The remains of Castelvecchio - a massive square tower, traces of walls and brick huts - point to the presence of a fortified village in medieval times. In the 13th century the area became property of the Count Meinhard II of Gorizia-Tyrol and then passed to the Lords of Castelrotto. In 1348 the castle was owned by Duke Konrad Teck, the captain of the Adige department. In the early 15th century, the fiefdom passed to the Hauenstein family and large permanent farms were established.

Shortly afterwards Hungarian Michael Kraus became the lord of the castle, and was famous for his wealthy estates and charitable works. He was later buried in the chapel of the tower, where his tomb is still located today. His grandson Jakob Kraus was ennobled by Emperor Rudolf II in 1607; he proceeded to the demolition of the castle, creating a chapel for the village dedicated to St. Anthony; Jacob's son Georg Kraus (1675) established a natural park with seven small chapels and three large crucifixes. In 1847 the house became extinct. In the centuries the income of the inhabitants came mostly from the breeding of cattle, supported by vast alpine meadows. In the course of the 20th century tourism gradually became the main economic activity.

WHAT TO SEE IN CASTELROTTO