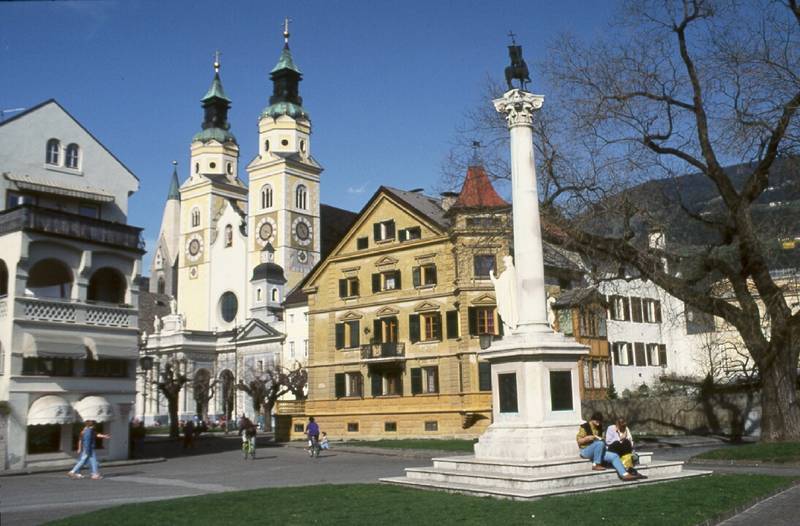 Bressanone - Brixen, Province of Bolzano, Trentino Alto Adige, Italy. Brixen am Eisack (in German) is a very old town (founded in 901 AD) and the third largest town of South Tyrol. Located at the junction of the Rienzea river and the Isarco river, it is an ancient, town with monuments from the medieval to the Baroque period. It is today a popular winter sports resort, thanks to the skiing facilities et Plancios-Plose. The majority of the population speaks German.

Art, culture and history have made Bressanone (Brixen) an important place and a must stop if you are traveling along the main north south valley of the Adige.  Located in the South Tyrol, Bressanone is more than 1,000 years old; it is the oldest in South Tyrol and was often a stopover for emperors on their travel and became a lavish bishop’s seat. The square in front of the cathedral, the protected historic centre from the Middle Ages, the porticos and lanes decorated with merlons, museum treasures, craft tradition and archaeological exhibits gives you plenty to discover.  Bressanone is a great city to stop over during your Bike Tour in Italy or Hiking-Walking Tour.

When you arrive in Bressanone (Brixen), you are in the centre of the South Tyrol. Bressanone can be reached easily on the Brenner highway and the Brenner railway line. Bressonane is close to everything: the Italian Dolomites, Val Gardena, the Seiser Alm, Meran, Bozen, the Kronplatz, Alta Badia, Obereggen-Latemar, North Tyrol, Trentino.

TOURING THE CITY OF BRESSANONE