PROVINCE OF VICENZA IN THE VENETO REGION OF ITALY 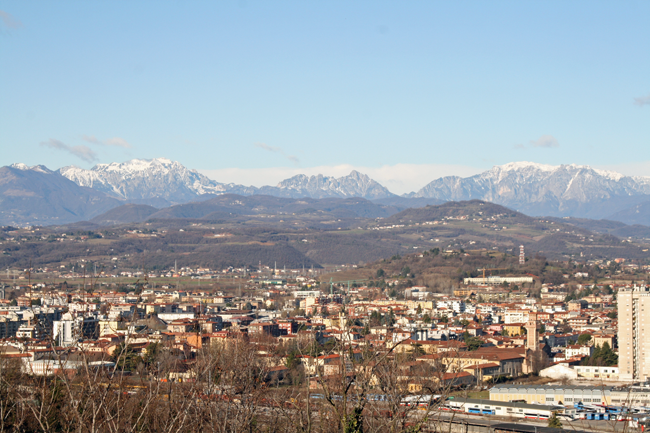 The Province of Vicenza (Provincia di Vicenza) is considered the heart of the Veneto region. The capital of the province is the PLACES TO VISIT IN THE VICENZA PROVINCE. The province has an area of 2,723 sqr km, and a total population of 840,000 (as of 2006). There are 121 townships (municipalities) in the province, due to the historical fragmentation of the territory (the highest in the Veneto) . Important towns in the province include Bassano del Grappa, Montecchio Maggiore, Torri di Quartesolo, Schio, Noventa Vicentina, Thiene, Marostica, Lonigo, Arzignano, Asiago and Valdagno.

Population is unevenly spread throughout the province. More than 60% of the populace resides in densely industrialised areas in the eastern, western, and northern (known as Alto Vicentino) industrial zones, as well as the area surrounding Bassano del Grappa. The remaining 40% reside in predominantly rural ares in the southern part of the province (the Colli Berici and Basso Vicentino) or the Asiago plateau.

PLACES TO VISIT IN THE VICENZA PROVINCE

THINGS TO DO IN THE VICENZA PROVINCE

Bicycle touring, mountain biking, hiking, rock climbing, and ski and snowboarding are the main outdoor recreation activities, but you could also cross country ski, para sail, cave, and kayak. Combine these activities with visiting Palladio villa's, walled cities, wine producers, and industrial complex's and you have a great vacation destination.

WHERE TO STAY IN THE VICENZA PROVINCE

FOOD AND WINE OF THE VICENZA PROVINCE

What To Eat in the Vicenza Province

The Vicenza area by tradition, bound to the cult of good wine and its passion for good food, with a variety of food from cheese to fish and cold cuts. The Asiago Plateau is all known for cheese (Asiago PDO, Morlacco and Burlacco, produced only in the summertime in the Grappa area). There are several singular flavored cold cuts like the Soppressa Vicentina (a perfect combination of sweet and peppery); the Veneto Berico-Euganeo PDO and the Val Liona hams; and even donkey meat salami that can be grilled, fried or eaten raw with polenta.

The land offers a variety of fruit and vegetables, particularly white asparagus and the white radicchio of Bassano del Grappa; the potatoes of Rotzo; the cherries of Marostica; the mushrooms of Costozza; and the black truffles of the Berici Hills. As for fish, the most famous is without a doubt the baccalà alla vicentina (dried codfish), followed by the excellent brown trout, prized for its white meat and delicate taste, and cooked in tinfoil, grilled or boiled.

These authentic dishes can be complemented with a glass of good wine, the production of which Vicenza Province is no novice.  There are plenty of  distilled liqueurs as well, most popular and known come from Bassano del Grappa.